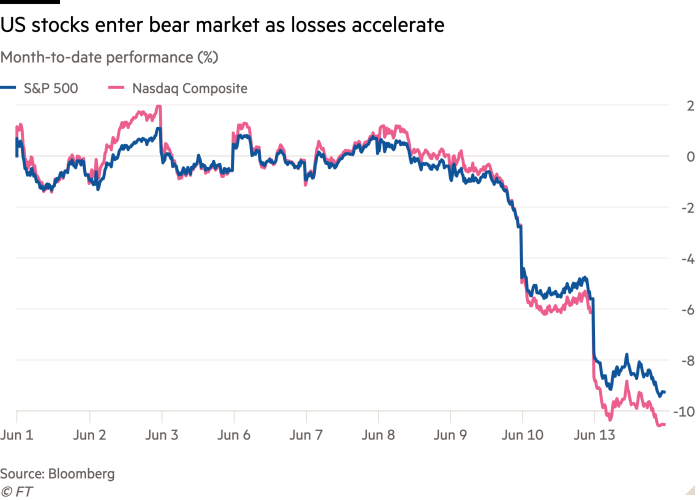 US stocks nudged higher on Tuesday, following a tumultuous previous session as markets prepared for the Federal Reserve to aggressively raise interest rates to fight inflation.

The S&P 500 advanced 0.7 per cent in choppy trading, edging higher after tumbling 4 per cent on Monday and finishing down more than a fifth from its all-time high in January.

The Nasdaq Composite also advanced 0.8 per cent. The technology-heavy index has fallen almost a third from its peak last November, with tighter monetary policy draining liquidity from markets and hitting speculative growth stocks.

Those fears were driven by soaring consumer price inflation, which hit a 40-year high after Russia’s invasion of Ukraine. Economists at JPMorgan, Goldman Sachs and Barclays all anticipate a 0.75 percentage point rise, which would be the first since 1994.

“I don’t think we’re actually at peak fear yet,” said Ross Mayfield, investment strategist at RW Baird. Short-term recoveries in risk assets “feel like classic bear market rallies”, he said. “I just don’t think the market is going to believe in peak inflation until we actually see it has peaked, and there’s probably another leg lower for markets.”

On Tuesday, money markets implied expectations for the benchmark US federal funds rate to climb to 3.6 per cent by the end of this year, compared with the current range of between 0.75 and 1 per cent.

“The concern is we move into 1970s style stagflation,” said Randeep Somel, portfolio manager at M&G, with the Fed likely to “send the message that this is their priority, that they can’t let it get out of control”.

Anticipation of sharper rate rises has driven a sell-off in US government bonds, whose fixed-income payments are also eroded by inflation. The yield on the benchmark 10-year Treasury note, which underpins global debt pricing, touched its highest level since 2011 on Monday. It traded flat on Tuesday at 3.36 per cent. Bond yields rise as their prices fall.

Signals from the European Central Bank last week that paved the way for its first rate rise since 2011 have also pressured the debt market’s financially weaker eurozone nations.

The yield on Greece’s 10-year bond rose by more than 0.3 percentage points to over 4.6 per cent on Tuesday.

Italy’s equivalent bond yield added 0.02 percentage points to just over 4 per cent, having now more than quadrupled since the start of the year. Bond yields move inversely to prices.

Sterling fell to an 11-month low against the euro of €1.15 on Tuesday, ahead of the Bank of England’s rate-setting meeting on Thursday and following data on Monday that showed the UK economy contracted in April.

Elsewhere in markets, cryptocurrency bitcoin dipped below $21,000 on Tuesday, later trading at about $22,000 — down more than 20 per cent from last Friday.

Europe’s Stoxx 600 share index fell 0.3 per cent, on track for its sixth consecutive day of falls.

A FTSE index of Asia-Pacific shares outside Japan fell 0.7 per cent, while Tokyo’s Nikkei 225 closed 1.3 per cent lower. ‘yeh Laal Rang’: Harsh Goenka Has A Hilarious Take On Cryptos, Stock Market And Investors Will Relate To It. See Post | Mint – Mint