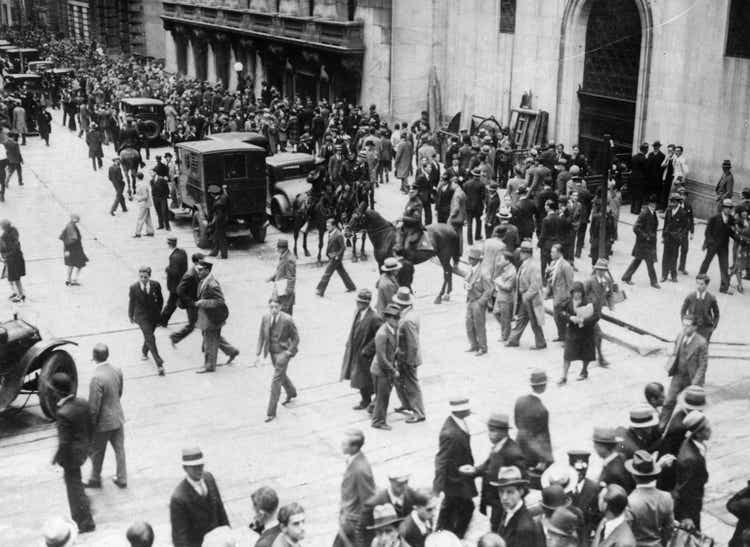 [A version of this article was shared with our Inside the Income Factory members and trial subscribers on May 17.]

Many readers know that my personal investing strategy and philosophy is based on viewing our stock portfolio as an asset (perhaps a “factory,” but it could also be an office building or other income-producing asset like a toll-road, or an oil or gas field, or a fleet of ships). The point is that we regard the cash flow produced by our factory or whatever it is as the source of the value being generated that accumulates over time.

Of course, this isn’t just my idea. Back in the 1930s, two books were written that became classics that changed investing forever, transforming stock markets from just a sort of “gambling casino” to a rational (at least in theory) mechanism for assessing the worth of various investments. The first book was Security Analysis (1934) by Benjamin Graham and David Dodd, which explained how investors could use fundamental analysis (something we take for granted now) to determine what a company’s earnings and cashflows were likely to be.

A few years later, economist John Burr Williams wrote The Theory of Investment Value (1938), in which he articulated the idea that the “intrinsic value” of a security was the discounted present value of all the future cash flows it would generate: primarily cash dividends and distributions, plus any residual value to be collected when selling the security or otherwise winding up the investment.

This means that, in a rational world, “the market” (“Mr. Market” as Benjamin Graham called it) would incorporate all the available knowledge about an investment, including its current and future earnings prospects, in the stock price; if not immediately, then eventually. This has led to the idea of “value investing” where we try to determine what we think the real value of an investment should be and then buy it at or below that level. Our expectation is that the market will eventually recognize the value and price it accordingly; but in the meantime, we are not particularly concerned if it continues to be mis-priced for awhile, since we are deriving the benefit of owning it, collecting its dividends and/or distributions and even re-investing in the security at its current price (i.e. below what we believe its intrinsic or economic value to be).

Once we realize this, take it to heart, and begin applying the idea to our own investments, it can liberate us from the obsession with “market prices” that the investment media promotes. The reason CNBC, for example, follows the financial markets the way ESPN follows the sports world, with constant reporting of the minute-to-minute changes to the score (i.e. “score” meaning the stock prices, market averages and indexes, etc.), is because they have no other choice if they want to keep their audience engaged and constantly tuning in.

If CNBC were to focus on fundamental values and the actual “income” being produced (or not) by all these stocks, bonds, funds, etc., it would be like watching the grass grow. People might tune in once a day or even once a week, but they wouldn’t keep the screen up all day long or be checking prices constantly. [New members who find this theme interesting may wish to read Chapter 2 from my book, which is re-published in this article.]

But before Graham & Dodd and John Burr Williams introduced us to the idea of “rational markets,” Wall Street was considered more of a big gambling casino. Throughout the 1920s, many investors were drawn to the stock market the way people later were drawn to Las Vegas or Reno. Markets went up and down because of sentiment, not analysis, or because people got “hot tips” that a stock was on the move. Without fundamental analysis and a theory of value to enable an investor to have his/her own idea about what a particular stock was “worth,” it made it hard for them to have “conviction” about holding on to an investment if the market was moving in the other direction.

That sort of lack of conviction – in other words, having no other reason to buy and hold a security other than the hope that it would go up – makes it easy for the herd mentality to take over and panics and market crashes to occur. That’s why the crash of 1929 was so sudden and severe, because so many investors had no particular reason to believe in the original investment decisions they had made once they saw market sentiment turn against them (not to mention how leveraged many of them were, with margin requirements much more liberal in those days).

‘Conviction’ Alone May Not Be Enough

Even if you have “conviction” that your particular stock portfolio – made up, let’s say, of blue chips or “dividend growth” stocks – represents solid companies or funds that will prove their value over the long term, it can still be challenging to hold on when the market is tanking. Especially if your dividend stream is only 1 or 2% like so many growth or dividend-growth stocks, and you have to watch your stock prices drop while collecting so little cash in the meantime.

Here is where an Income Factory® or even some other, generic high-yield income method of investing can prove valuable. If we invest in stocks where the entire total return (or at least most of it) is being paid out via a cash dividend or distribution of 8, 9 or 10%, then we can see, feel and reinvest the stream of value that John Burr Williams was writing about. We don’t have to wait for it, or hope we’re going to get it in the future. We’re getting it right now, regardless of how the market chooses to price our security in the short term.

And if we reinvest it (as many investors in a pre-retirement mode do, as well as retirees like me who spend part of my monthly 9-10% income stream, but reinvest and compound the rest, thus never touching but actually growing the principal) then we see our income and ultimately our wealth growing every month, even if the paper value of our portfolio fluctuates.

Better yet, during downturns like the current one, we actually grow our income faster than ever, since we’re reinvesting at bargain prices and higher than ever yields. Years from now, when we no longer remember what market prices were at times like this, we will enjoy having incomes that are even larger than they would otherwise be had markets today been more bullish.

Does that mean we won’t still be concerned and anxious when we see volatile markets gyrating all over the place? No, it doesn’t. But for me, I worry a lot less than I would if I were in growth stocks and NOT collecting my river of cash to reinvest every month. And if I took money out of the market, sacrificing income, then I’d be even more worried that I had given up current and future income, and was risking being left on the platform at the station when the train suddenly starts moving again.

Understanding What Has Been Happening Recently

I don’t claim to be a market prophet or guru, and certainly not a psychologist, but my best take on what I think has happened over the past couple years is that we have repeated in a modern sense what happened during the “Roaring 20’s.” But compressed into a much shorter time period and amplified by our modern media and technology.

The Covid pandemic and global uncertainty, combined with the energy price manipulation in early 2020 by the Saudis and Russians, sparked the initial crash. Then when it became clear that despite all the disruption in the economy, the big companies (the ones we invest in, not the smaller firms and mom-and-pops on Main Street America, who really took it on the chin) were mostly going to muddle through just fine, the market started to recover.

But at the same time, you had a huge number of people, now working from home, or just “at home” and not working, with iPhones, investing apps and time on their hands, who discovered a neat new video game called: “the stock market.” Many of them (and we probably all know several) knew nothing about investing or the companies they were investing in, but knew it was fun and easy, and – better yet – the stocks they bought went up. So that encouraged them to keep playing the game, so their stocks went up even more.

But all good things, especially if they seem too easy, come to an end. There were and are real challenges in the world economy, like supply chain issues and imbalances, shortages of labor and materials, inflation whether short-term or permanent or a bit of both. All of this eventually caused the bubble to start to leak and then burst, partly for some fundamental reasons, but mostly (I suspect) because we had so many new investors who were doing it for fun but without much knowledge or conviction, and who were probably quick to give up the game once they saw it was harder and less fun than they originally expected.

That’s my take on what has been going on over the past year and in recent months. I think there are plenty of economic and geopolitical uncertainties, as I have written recently, all of which make me a lot more comfortable earning my high yields mostly from less “heroic” investments, like credit bets, as opposed to more heroic bets of the sort we are making when we buy equities.

But in addition, I think the market’s volatility – the degree it rose and the depth and suddenness of its fall – and the additional volatility that may still lie ahead, reflects the influx of a whole new investing cohort that has little knowledge or experience and therefore will be more “flighty” than the pre-Covid investing public we were all more familiar with.

It reinforces my conviction that we have to look to ourselves and our own investment principles to justify what we are doing. For members of our Inside the Income Factory community, that continues to mean owning well-diversified, high-yielding sustainable cash-producing portfolios that grow their income through thick and thin, regardless of market price volatility.

[Bibliographical note: If you are interested in some of the parallels between the late 1920s and our post-Covid market experience, check out John Kenneth Galbraith’s classic The Great Crash 1929. It was required reading for economics majors at Georgetown a half century ago, and still makes fascinating reading today.] Stock Market Down 0.14% on Sell-off in FBN Holdings, 17 Others – THISDAY Newspapers