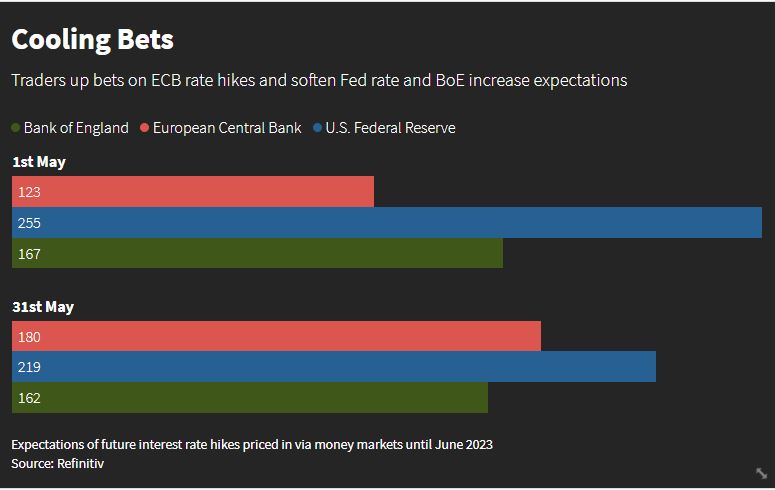 LONDON, May 31 (Reuters) – Sell in May? They certainly did, but rather than go away as the old stock market adage suggests, traders returned to aggressively buy the dip, causing some of the wildest monthly swings in recent times.

There was plenty of selling in the first half of the month across asset classes, driven by aggressive central banks, inflation and China’s lockdown policies. But markets subsequently started dialling back expectations of U.S. interest rate rises.

Now worries over rising prices are back at the forefront; on Tuesday, oil climbed above $123 per barrel and euro zone data showed record 8.1% inflation in May.

All that means “there will be a large degree of scepticism in the market that we have seen the bottom yet”, said Stuart Cole, chief macro strategist at Equiti Capital.

Below is a summary of how some major asset classes fared this month:

U.S. 10-year Treasury yields are ending May near where they started, but in between was a rise to 3-1/2-year highs above 3.2%, a tumble to six-week lows, and then another rise on the last day of the month.

The moves are consistent with the ebb and flow of Fed rate hike expectations, which in early May implied U.S. interest rates would peak above 3.3% .

Growth fears and weak economic data trimmed that bet to around 2.9%, before oil’s surge and hawkish comments from Fed governor Christopher Waller pushed futures back above 3% .

Lack of visibility on interest rates and the economy will “continue to feed volatility,” said Francois Savary, cio of wealth manager Prime Partners. “Where the terminal rate is, still remains the key issue.”

Bets on the European Central Bank swung even more. Some 175 bps of rate hikes are priced for the coming year, versus 123 bps in early May, as policymakers signalled an exit from negative rates by September.

The MSCI’s global stocks benchmark (.MIWD00000PUS) had burnt nearly $5 trillion of value at its bottom on May 9 versus its peak during the month, plumbing its lowest in around 18 months.

From that point the index has rallied 8% as markets unwound the most aggressive Fed tightening bets. So the MSCI World index is set to end May with a small gain, returning to a market capitalisation north of $60 trillion.

The stock segment arguably most vulnerable to interest rate swings – U.S. tech – meanwhile plunged 15% in the first 20 days of the month, before rebounding 12%.

Goldman Sachs said a sustained rebound hinged on “additional clarity on how fast inflation decelerates from here, how monetary policy reacts, and the implications for the growth outlook.”

U.S. junk-rated corporate bonds too saw wild swings, with the risk premiums demanded by investors shooting as high as 494 bps, from 405 at the start of May. They are now back at 419 bps. (.MERH0A0)

A hawkish ECB pivot infused fresh life into the euro, lifting it as much as 4% from five-year lows hit earlier this month.

However, while an imminent end to negative euro zone interest rates has knocked the U.S. dollar index off two-decade highs, investors are wary of screaming “peak dollar”, given the Fed shows no signs of slowing its policy tightening campaign.

And as the European Union prepares to slash Russian oil imports, the recession threat could return to haunt the euro.

Markets were rocked by the mid-May collapse of TerraUSD, a stablecoin which lost its 1:1 dollar peg triggering big falls in other crypto assets.

But unlike stocks, they have not witnessed any meaningful recovery.

On May 12, three days after the TerraUSD peg began to break, bitcoin fell to $25,401, its lowest since December 2020. The largest coin by market cap ended up shedding around 20% during the month, its biggest monthly loss in a year. .

By the time TerraUSD collapsed, the total market cap of all cryptocurrencies had slipped as low as $1.14 trillion, according to CoinMarketCap. It stands now at $1.3 trillion, down around 25% this month and more than 56% below November’s peak of almost $3 trillion.

On oil markets there was none of the yo-yoing other asset classes witnessed this month. Instead Brent crude futures marched to a sixth consecutive month of gains, the biggest rising streak in a decade, adding to the headaches of policymakers battling to rein in inflation.

Brent topped $124 per barrel on Tuesday, its highest since March 9, after European Union leaders agreed to slash oil imports from Russia by year-end. read more

Prices found further support as China announced an end to its COVID-19 lockdown, and will allow people in Shanghai to leave their homes and drive their cars from Wednesday. That will likely add to global energy demand, just as holiday season demand picks up in the Northern Hemisphere summer. 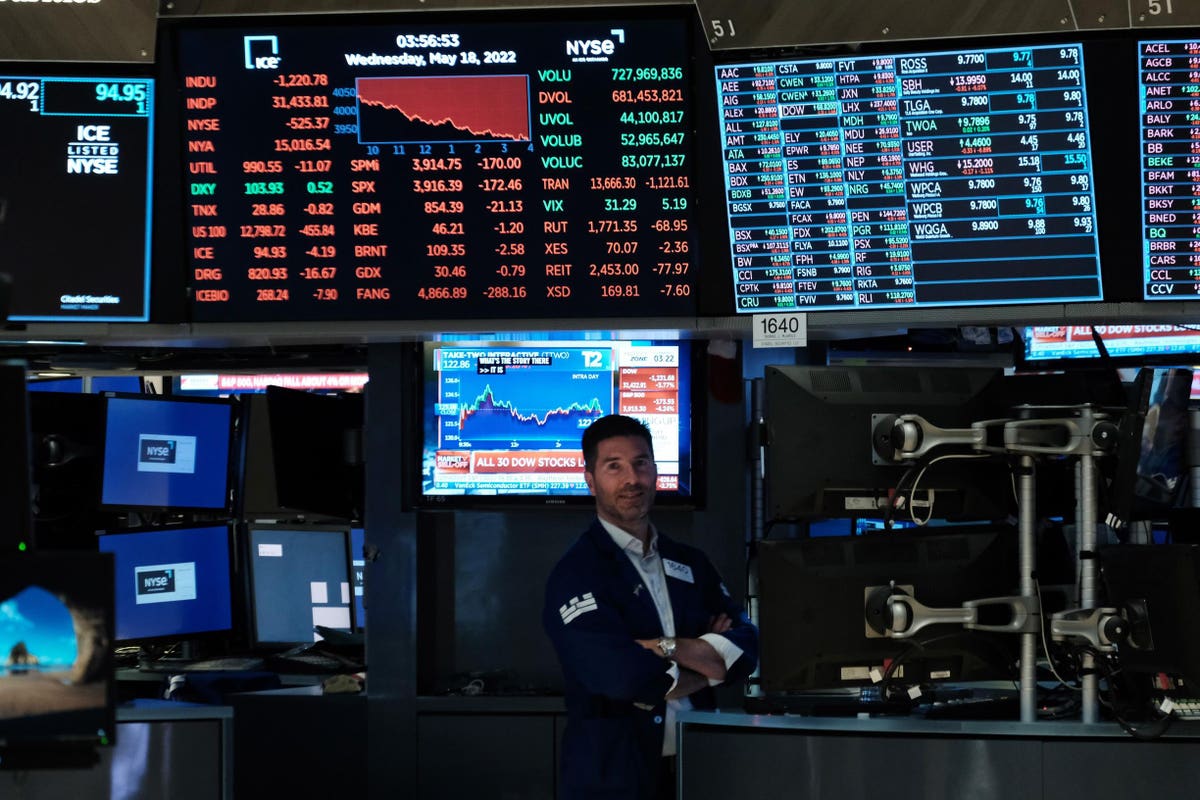 Sell? No Way – This Is A Buyers’ Stock Market – Forbes